· Because a family of four needs a second toilet. ·

I think I’ve mentioned (over and over) that our first priority once we got the house was to settle the kids in as much as possible. This prioritized the upstairs bathroom, which looked like this when we moved in:

Not beautiful (the CARPET! the BORDER! the WEIRD CUPBOARD BETWEEN THE VANITY AND TOILET!), but honestly, in a house this old, it’s nice to have a space already dedicated to doing your business, in addition to a room with plumbing and electricity. Oh, I probably should offer some perspective on the upstairs. Here we are, on the top of the stair landing, at the front of the house. There are 5 rooms on this floor – four equally sized bedrooms and one bathroom.

Okay, so now that I hope you can imagine yourself there, imagine helping to demo:

I look back on the dates these photos were taken and cringe a bit. If you’re in the midst of planning a renovation and came here for before and after photos, I’m disappointing you. We did demo in late August; it’s now November and we still don’t have a completed bathroom. It just takes time – no HGTV Quick Reveals in real life.

After much deliberation, we chose to keep the footprint of the bathroom the same – it was hard, because we have 12 and 14 year old kids of different genders. They are in the prime of desiring privacy, and each had their own bathroom at our previously renovated house:

I mean, who wants to curl their hair while their brother takes a shower? So we really wanted to make a private toilet room at minimum, but the window placement and overall size (7’10×7’6) made extra walls and door pretty impossible.

But families do it all of the time – the previous family here had four kids and the parents upstairs, all with one bathroom! So my privileged kids would be fine. And they agreed the layout worked for them.

We did choose to remove the tub so they could have a bigger shower. We added a bench and niche for toiletries.

We still had to update the plumbing and electrical, so with the removal of the old ceiling, this will be a very “new” bathroom for this old house.

Stay tuned for how I attempt to keep the old character through the finishes. It’s a great story! 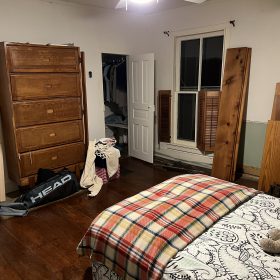 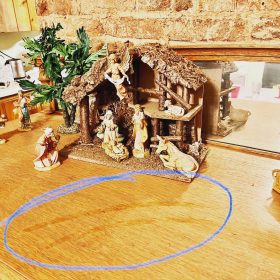 Made some big decisions over the past few days for

Our first Easter at #iotlavalleyfarm. So grateful

I design, you decide: replace these windows above